We offer express lentiviral and retroviral packaging services to produce high-quality, high-titer virus particles using your viral construct with a turnaround time of 1-2 weeks. Save yourself the time and effort of preparing your own virus and receive ready-to-transduce viral particles.

Features of our packaging services:

The system of three expression cassettes developed in 1996 is considered the first generation of lentivirus. In this system the packaging cassette has all structural proteins, with exception of Env glycoproteins, and all accessory and regulatory proteins. The 5’ LTR was substituted by a strong promoter (CMV or RSV) and the 3’ LTR by an SV40 or insulin poly(A) site to reduce the homology between the cassettes. In the Env expression cassette the gp120 from HIV-1 was replaced by other envelope genes such as VSV-G or amphotrophic MLV. The transgene cassette was composed of the 5’ LTR, the ψ with a truncated gag gene, the RRE cis-acting region and the gene of interest under the control of a heterologous promoter (usually CMV) and the 3’LTR. This system allowed an easy way to achieve good titers but its level of safety was not very high.

In the second generation lentiviral system, the three plasmid system was maintained, but all accessory genes not required for viral replication in vitro (vif, vpr, vpu, and nef) were removed, improving safety and decreasing cytotoxicity without negative effects on vector yield or infectivity.

In the third generation lentiviral system, the tat is eliminated and the rev is placed in an independent plasmid. The tar sequence was replaced by a strong heterologous promoter. Therefore Tat protein was no longer necessary to increase the transgene transcription and the tat gene was eliminated. Rev was placed in an independent non-overlapping plasmid increasing the safety as now four events of homologous recombination would be required for replication competent lentivirus (RCL) formation. With these new features, the vectors of the third-generation system offer a higher level of biosafety and. Additionally, since the resulting titers do not decrease, third generation vectors have become the most commonly used lentivirus system.

Through years of experience with lentiviral and retroviral vectors, we have developed our own proprietary virus packaging systems and efficient protocols for rapid generation of pseudoviral particles. Our lentiviral transfer plasmids, and packaging mix are generalized and appropriate for wide-ranging cell types and systems. The process of producing infectious transgenic lentivirus is outlined in the simple schema below.

Expression and packaging mix plasmids are transfected into HEK293FT cells: one transfer plasmid, one or two packaging plasmid(s) and one envelope plasmid. After a media change and an incubation period of approximately 48 hours, supernatant containing the virus is removed and stored, or centrifuged to concentrate virus. Crude or concentrated virus can then be used to transduce the cells of interest.

Once viral supernatant or concentrated virus is collected, genomic viral RNA is purified from a small aliquot of the virus using a viral RNA purification kit. The RNA is then treated with DNase I to remove any residual plasmid DNA carried over from transient transfection of the packaging cells. Serial dilutions of the viral RNA sample are subjected to qRT-PCR to determine threshold cycle (Ct) values for each dilution. The RNA genome copy number in a sample dilution is determined by finding the copy number that corresponds to its Ct value on a standard curve generated from serial dilutions of the calibrated Lenti-X RNA Control Template. 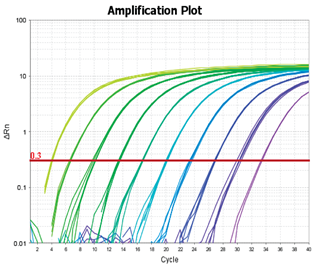 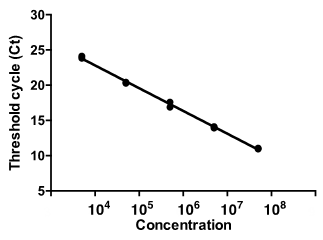 An IFU value is also determined by independent means (e.g. via FACS or colony selection) to establish a relationship between the two values. For subsequent, similarly prepared virus supernatants, the qRT-PCR titration value may be used as a reference to determine a relative IFU value for the concentrated virus and then later, the MOI for the infection experiment.

If you don't see the titer or volume your project requires, please CONTACT US for a price request.